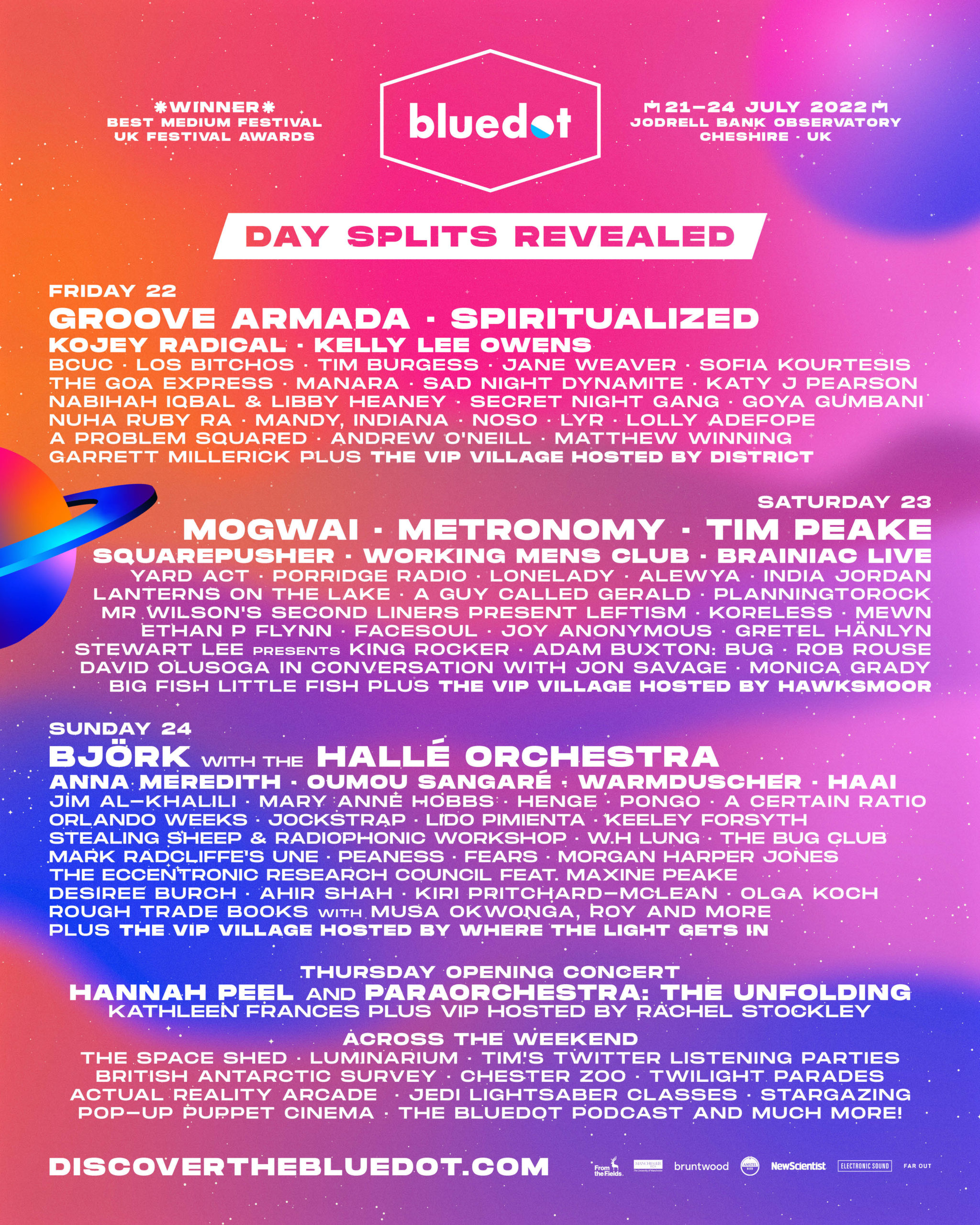 VIP Village to host Hawksmoor, Where The Light Gets In

and District, in association with EatWell

Bluedot Festival has added Kojey Radical, Mary Anne Hobbs, Warmduscher and more, plus science headliners Tim Peake and Brainiac Live to its 2022 line-up. The new additions land as the festival reveals its 2022 day splits – with day tickets set to be released 10am, Friday 25 March.

The festival has also revealed a new VIP Village, in partnership with Bruntwood, hosting an award-winning rotation of restaurants and food brands including Hawksmoor, the Michelin-listed Where The Light Gets In, Manchester’s home of unique Thai tasting menus District and ex-Baratxuri head chef Rachel Stockley. The new VIP experience will raise money for the charity Eat Well MCR, which help to deliver up to 1,000 meals a week, partnering with organisations in Greater Manchester that support people sidelined by poverty.

Tim Peake will headline an out-of-this world science line up at this year’s bluedot festival and is set to be a huge draw for science and space-loving families.  The family programme will also see appearances by Clangers, The Space Shed and legendary family favourites Brainiac Live.

Now in its fifth year, bluedot is an award-winning music, science and culture festival hosted at the site of the awe-inspiring Lovell Telescope – one of the biggest telescopes in the world and an icon of global astronomy.

The new additions join an impressive family science offering programmed by Jodrell Bank. With over 30 hands-on science stalls and workshops, there’s something to engage all budding scientists. Highlights include Live Science Shows from guests including Chester Zoo, Ancient Antarctic Ice Cores with British Antarctic Survey and Meet and Learn sessions from scientists including Sarah Crowther and The Volcanologists. Celebrating the iconic setting of the festival, families will also be able to walk beneath the iconic Lovell Telescope, take in late-night Stargazing sessions and explore the wider areas including Woodland Glade Nature Trials, the Whispering Dishes and The Jodrell Bank Arboretum.

Festival director Ben Robinson said: “After a two-year hiatus, our fifth instalment of bluedot looks set to be one of our best yet. Welcoming Tim Peake to Jodrell Bank alongside huge musical acts including Björk, Groove Armada and Mogwai to excite and inspire festival goers under the Lovell Telescope is going to be really special.

“Jodrell Bank is a jaw-dropping location and the perfect place to be inspired as a family by the wonders of science and culture, with hands on workshops, electrifying experiences and hilariously engaging shows. We can’t wait to be back in action.”

bluedot 2022 will take place 21-24 July. Named Best Medium Festival at the UK Festival Awards, it has quickly gained a position as one of the most hotly anticipated festivals in the country for families and music-lovers alike. Music and science headliners revealed so far include headline acts Björk and The Hallé, Groove Armada, Mogwai and Metronomy, plus Radio 4’s Jim al-Khalili, The Sky At Night’s Chris Lintott and more.

For tickets and information visit: discoverthebluedot.com